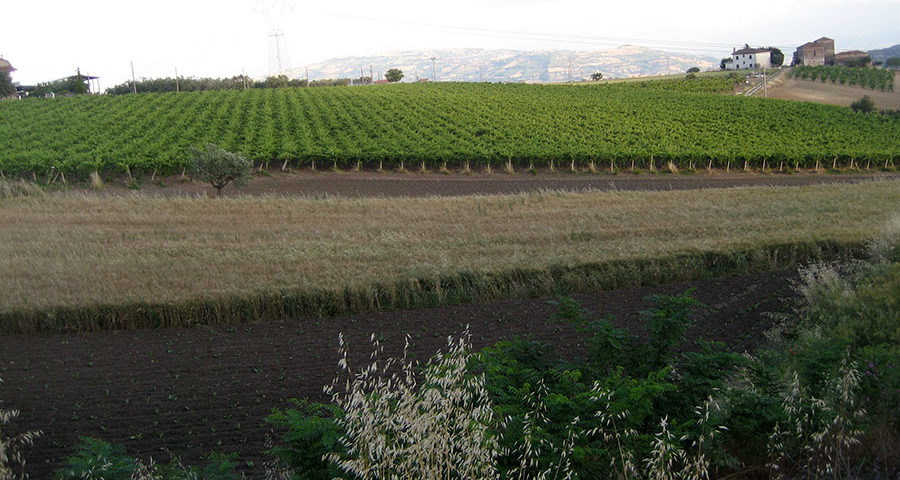 Vineyard in Paduli .We are in Sannio beneventano in the municipality of Paduli, an area marked by an ancient winemaking tradition. The territory, although particularly suited, in the 80s has sacrificed the traditional cultivations of vines and olive trees in favor of industrial agricultural production, such as tobacco, certainly more profitable than oil and wine.

In 1985, a very strong and historic frost gave the coup de grace, damaging the old farm vineyards that were “married” to other plants, and significantly reduced throughout the territory the historical trace of the local viticulture. While in most of the territory of the municipality of Paduli tobacco was grown, aware of the particular vocation of the territory, in the wake of family traditions we wanted to resume the cultivation of the vine, preferring initially the native varieties such as Falanghina,

Greco and Fiano for the whites and some years later Aglianico, in the memory of red wine produced and marketed loose by grandfather Antonio. The ROSSOVERMIGLIO vineyards are located in the south-east of Benevento, at the foot of the Campania Apennines, in an area diametrically opposite to the area of major production of the Samnite wine production. Here the pedo-climatic conditions make it possible to differentiate the varietal expression of the native vines, which are grown in espaliers with plant density that reaches 5,000 plants per hectare.

The average altitude of the farm vineyards is about 300 m asl, the soils are rather poor in organic substance, rich in skeleton and with a good presence of clay and limestone. The temperatures are on average lower than the other wine-growing areas of the Sannio, with strong temperature variations between day and night, frequent snowfalls in winter and good annual rainfall.

Therefore the evolution of all the phenological phases of the vine is rather late and the maturation is slow and gradual. It is thanks to these peculiarities that the wines produced in this land find in the lower concentration, freshness and finesse the distinctive elements of the expression of the varietal characters and of the Samniticum terroir.